Businesses, politicians and even lawyers are voicing their support for a Mediation Bill which could save the State billions of euros and save the courts thousands of hours annually.
The Mediators’ Institute of Ireland (MII), which has been lobbying for the bill since 2012, say the present draft would see Ireland take a global lead in diverting many civil and commercial disputes from courts.

“We’re cautiously optimistic there is an appetite for this legislation, which would deliver huge time and cost savings for state agencies” said MII President, Sabine Walsh. “It is a progressive piece of legislation and, once enacted, we’d be global leaders for mediation”.
Highlighting the financial gains MII points to cost savings that were identified by Tom Ward, chief clerk of the Dublin Circuit and District Courts in a pilot mediation programme that ended on August 31, 2013.

Mr. Ward reported that 831 cases reached agreement which resulted in saving an estimated 11.33% of court sitting time and annual savings of €119, 476 in courts service costs plus €225,164 in legal and board costs. This pilot programme is now being extended in Dublin and Cork. 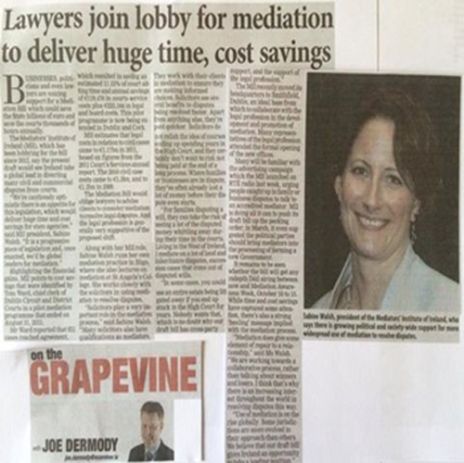 Along with her MII role, Sabine Walsh runs her own mediation practice in Sligo where she also lectures on mediation at St. Angela’s College. She works closely with the solicitors in using mediation to resolve disputes. “Solicitors play a very important role in the mediation process” said Sabine Walsh. “Many solicitors also have qualifications as mediators. They work with their clients in mediation to ensure they are making informed choices. Solicitors see several benefits to disputes being resolved faster. Apart from anything else they’re paid quicker. Solicitors do not relish the idea of cases ending up spending years in the High Court and they certainly don’t want to risk not being paid at the end of a long process. Where families or businesses are in dispute, they’ve often already lost a lot of money before their dispute even starts. “For families disputing a will, they can take the risk of seeing a lot of the disputed money whittling away during their time in the courts. Living in the West of Ireland I mediate on a lot of land and inheritance disputes, succession cases that come out of disputed wills. “In some cases, you could see and entire estate being litigated away if you end up stuck in the High Court for years. Nobody wants that, which is no doubt why our draft bill has cross-party support and the support of the legal profession”.

The MII recently moved its headquarters to Smithfield, Dublin, an ideal base from which to collaborate with the legal profession in the development and promotion of mediation. Many representatives of the legal profession attend the formal opening of the new offices.
Many will be familiar with the advertising campaign which the MII launched on RTE radio las week, urging people caught up in family or business disputes to talk to an accredited mediator. MII is doing all it can to push it’s draft bill up the pecking order; In March, it even suggested the political parties should bring mediators into the process of forming a new government.
It remains to be seen whether the bill will get any in-depth Dáil airing between now and Mediation Awareness Week, October 10-15th. While time and cost savings have captured some attention, there’s also a strong ‘healing’ message implied with the mediation process. “Mediation does give some element of repair to a relationship” said Ms. Walsh. “We are working towards a collaborative process, rather than talking about winners and losers. I think that’s why there is an increasing interest throughout the world in resolving disputes this way. “Use of mediation is on the rise globally. Some jurisdictions are more evolved in their approach than others. We believe that our draft bill gives Ireland an opportunity to take a leading position”.

For other news items got to: http://www.themii.ie/news

Strictly necessary cookies
These cookies are essential for visitors to be able to browse the website and use its features. None of this information can be used to identify visitors as all data is anonymized.

Currency
Purpose: To be able to show prices in the currency matching the visitor's preferences.
Duration: 30 days.

Google Recaptcha
Purpose: To be able to validate whether the visitor is human and to limit the amount of spam from contact forms.
Duration: 1 year.
Provider: Google.


Third-party cookies
These cookies collect information about how visitors use the website, like which pages they've visited and which links they've clicked on. None of this information can be used to identify visitors as all data is anonymized.

ga
Purpose: Registers a unique ID that is used to generate statistical data on how the visitor uses the website.
Duration: 1 year.
Provider: Google.

gid
Purpose: Registers a unique ID that is used to generate statistical data on how the visitor uses the website.
Duration: 24 hours.
Provider: Google.

We also integrate with social platforms on this site that allow you to connect with your social network in various ways. Social media integration will set cookies through the website which may be used to enhance your profile on social media sites or contribute to the data they hold for various purposes outlined in their respective privacy policies.